Since its inception, the digital realm has been an economic “wild west.” Laws and regulations written in the “brick and mortar” world often do not apply or are, for all practical purposes, unenforceable in the digital counterpart.  Just as regulators attempt to catch up by creating new laws and enforcement mechanisms, the digital realm moves the frontier out even further – creating new turf that is free from governance.

Tax is no different.

For years, tax authorities have been attempting to extend their tax net into the digital realm.  In recent years it seems that tax collectors have been gaining ground. In part one of this article, we looked at Thailand’s proposal to tax the digital economy through a destination-based value added tax (VAT) system.  The draft tax law, when enacted, will have Thailand imposing VAT on foreign supplied digital content and services.  In this article, we explore the global trends and developments on digital tax laws.  We will also discuss the impact on businesses from this emerging digital tax landscape.

The start of the decade saw the first wave of transaction-based taxes imposed on the digital economy.  Northern European countries such as Norway, Switzerland, and Iceland were early adopters.  In 2011, Norway imposed VAT on foreign suppliers of digital contents and services to Norwegian consumers.[1]  Asia Pacific countries followed suit with major economies such as Japan, South Korea, India, Australia, New Zealand and Taiwan implementing similar taxes between 2015 and 2018.  Singapore confirmed that it will start imposing GST on foreign supplied digital content and services in 2020.[2]  Other countries such as China and Malaysia are reviewing their tax regimes and are expected to enact similar taxes in the future.[3]

Outside of Asia Pacific, the European Union is the largest economic bloc to have implemented VAT on foreign supplied digital services or content. The EU digital tax regime went live on 1 January 2015 and is currently being amended for the purpose of simplifying the rules.[4]  Several other countries such as Russia, Switzerland, Morocco, the UAE, and South Africa have also implemented digital tax laws.  The reader may refer to Table A for a summary of the countries which have implemented the new taxes. These new taxes share a common principle in that they take the form of destination-based indirect taxes that are imposed on non-resident suppliers of digital services and contents. The taxes generally contain features described in Table B. 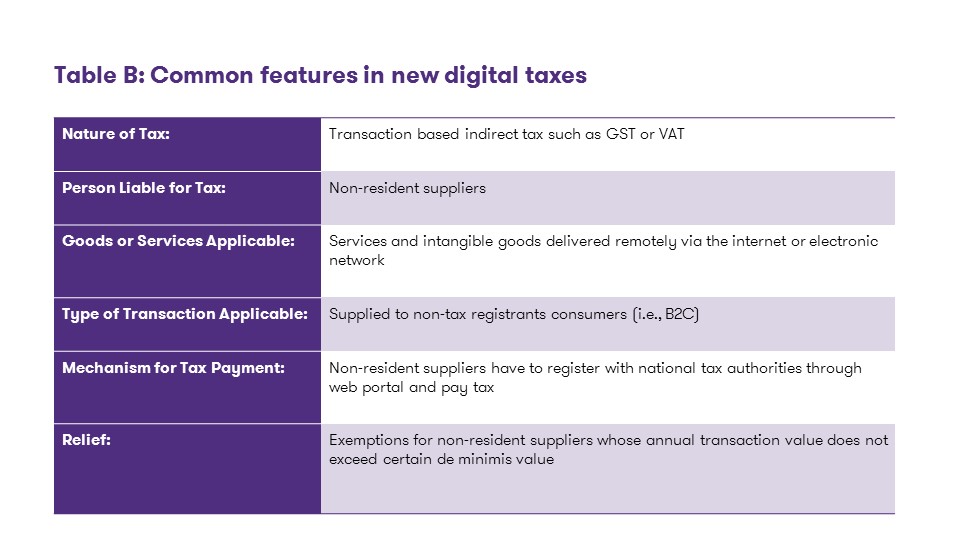 What are the implications of these new taxes for businesses operating in the digital economy?

First and foremost, the cost of doing business may have increased exponentially.  Software development companies or digital content sellers must not only comply with the tax regulations in their place of domicile, but must also comply with the tax regulations in each jurisdiction in which their products are consumed.  This means engaging with tax advisors and administering tax compliance (i.e., tax determination, registration, and filing of returns) for countries where the digital services or products are sold.

Secondly, existing business transaction models may have to be revised, resulting in possible inefficiencies or reallocation of risks.  Given that most of the new digital taxes are imposed on the B2C phase, the tax liability often rests on the party at the end of the transaction chain that supplies the service or content to the end-user.  When a new tax liability arises anywhere in a supply chain, it is almost inevitable that the contractual arrangements between the parties will be revised in attempts to redistribute risks and costs along the supply chain.  For example, if an online application store will be charged with VAT or GST, this cost will be passed back up to the application developer or publisher.  For online marketplaces where each content developer operates their own storefront, the compliance risks may have to be re-contracted between the marketplace operator and the content developer.

Thirdly, businesses may have to choose between raising prices for digital services or contents, thereby possibly experiencing reduced sales numbers; or absorbing the tax cost, thereby resulting in less profit.  The amount of GST or VAT imposed varies amongst countries. Tax rates could range from 5 to over 20%, depending on jurisdiction.[5]  E-commerce operators may opt to pass all or a part of such tax cost over to the consumer by rising prices for the supplied services or contents, thereby possibly resulting in less sales and thus lower revenue (and ultimately profits), or they may decide to absorb the tax cost which will directly impact profits.

As mentioned in our first article, taxes on the digital economy are inevitable from both a tax policy and fiscal requirement standpoint.  However, with every new challenge comes new opportunities.  Businesses may seek means to enhance efficiency in administering tax compliance, thereby gaining comparative cost advantages over competitors.  In addition, proactive tax planning can help businesses seamlessly adjust to new tax environments with minimal interruptions. This type of forward-looking adjustment could help optimise cost savings to the supply chain, and delivery of products and services to consumers.

The lesson here is a familiar one; once again, a clear understanding of current and future tax laws, combined with organised, assertive leadership, can deliver real-world advantages for companies in a competitive marketplace.

[5] For instance, Norway imposes a VAT rate of 25%, Turkey 18%, whilst countries like Saudi Arabia and the United Arab Emirates charge 5%. For EU VAT rates, see, https://ec.europa.eu/taxation_customs/sites/taxation/files/resources/documents/taxation/vat/how_vat_works/rates/vat_rates_en.pdf.