Economy treads water in Q1, but stage is now set for recovery

Like most of the world, Thailand limped through 2020 on the back of an economy weakened by the pandemic. Its economic contraction of 4.2% in the fourth quarter of the year was significantly better than analysts had predicted, yet some industries – travel and tourism in particular – suffered mightily as revenue opportunities dried up.

New year, same story in the world of travel

January brought little relief for these beleaguered sectors of the Thai economy. Data from the country’s Tourism Ministry showed that just 7,694 foreign tourists were present in Thailand that month, representing a decline of 99.8% from the same period a year earlier.

Amid an outbreak of COVID-19 cases in Samut Sakhon near the end of that month, Thailand’s Finance Ministry significantly reduced its national 2021 economic growth forecast from a healthy 4.5% down to just 2.8%. The government’s well-intentioned domestic tourism subsidy had largely failed to deliver on expectations up to that point, and this new outbreak slowed down progress even more.

Recent announcements of extended public holidays during 2021 were likewise aimed at spurring domestic tourism, but according to the president of the Tourism Council of Thailand (TCT), many Thais have decided to hold onto their savings until the overall economy improves. Indeed, according to a TCT survey, the number of Thai tourists planning trips has decreased by 22 percentage points from the fourth quarter of 2020 to the first quarter of 2021.

These and other setbacks in the sector contributed to an estimated economic contraction of 1.5% for the country as a whole in January – but better news elsewhere in the economy gives ample reason for hope.

As travel-related businesses struggled, January brought some unexpected bright spots to other parts of Thailand’s business community. 7,283 new businesses were registered nationwide – the highest total since January 2019. The total registered capital for new businesses rose just over 12% month-on-month, and more than 90% year-on-year. Building and construction, real estate, and transport and logistics were the most active sectors for new business registration in January.

Export numbers rose as well, registering an increase of 0.35% above its totals from a year earlier – before the seriousness of COVID-19 had been widely recognised. Thailand’s imports likewise considerably beat expectations, though they remain 5.24% lower than at the same time in the previous year.

Domestic consumption is also receiving a boost due to stimulus packages such as the country’s ‘Rao Chana’ (We Win) scheme, which opened for registration in February. This programme provides up to 7,000 baht in purchasing assistance to economically vulnerable Thai citizens, to provide support and keep them active in the economy. Rao Chana encountered some serious speedbumps during its rollout phase, but improvement efforts seem to be underway.

Meanwhile, the IT sector has found itself in high demand for other pandemic-related reasons. With more people taking up working (and studying) from home, all kinds of devices and accessories to facilitate these tasks have seen increased sales. Similar boosts in demand have surrounded certain types of food, home appliances, and items for personal use – such as masks, rubber gloves, and other products that provide protection from COVID-19.

The economic effects of the pandemic, therefore, have been anything but uniform. In fact, despite the continuing frustration within travel-related industries, businesses and investors in Thailand have many reasons for optimism.

The SET Index ended last year at 1450 points. As of this writing, it is up to around 1570 – outpacing its regional peers as well as the MSCI ASEAN Index, which dropped 1.9 percent.

This show of investor confidence mirrors similar sentiments across the business community, as highlighted above in terms of new business registrations. With the Samut Sakhon outbreaks mostly contained, vaccines on the verge of distribution, and government stimulus efforts helping to prop up consumer spending, the worst of the pandemic may be behind us.

But it doesn’t therefore follow that increased revenue will just pour in automatically, like the opening of a faucet. Consumer confidence remains low, so businesses will need to make the act of purchasing far easier – through innovations like e-commerce as well as flexible payment plans.

The nation’s Finance Ministry predicted an influx of 5 million tourists this year, but Thailand is not the only country whose tourism industry is desperate for more business. Other countries’ travel and tourism companies will go to great lengths to attract overseas travellers, and so the businesses here must match the energy and creativity of their competitors. The Thai government must also make decisions quickly and decisively about whether (and how) to accept travellers with ‘vaccine passports’, knowing that the countries with clearer and more liberal arrival policies will attract far more visitors from abroad.

As Thailand waits for widespread vaccine distribution within its borders, both government and the private sector should be using every waking hour to prepare themselves for the new world that is coming. Systems should be updated for smoother service, technology upgraded for expanded capability, and greater flexibility incorporated into each process so that when business conditions change yet again – which they will – the necessary transitions and adaptations can be achieved without skipping a beat.

Analysts expect a 4% growth in exports this year, after contracting by just over 6% in 2020. Overall, the Thai economy is expected to grow by around 3% in 2021, with 3.5% possible if optimistic predictions are correct.

But as with the pandemic itself, the recovery will also not be experienced in a uniform way. Businesses that prepare – not just for a new world, but for a changing world – will have the ability to seize opportunities the very moment they appear. An agile mindset and organisational structure can make all the difference between a company that loses its way when markets change, and a company that thrives.

The decisions your business makes right now will have outsized effects when vaccines are distributed and government support slows to a trickle. Contact Grant Thornton in Thailand today to make sure your company is fully prepared and on track for growth. 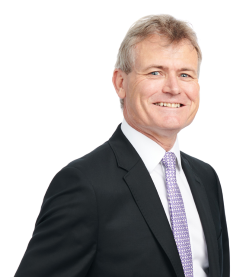