I recently had the pleasure of meeting with former Mead Johnson Nutrition CEO Steve Golsby to discuss some of the business insights he has accrued over a long and prosperous career.

Steve’s career progression began in earnest during his time as a brand manager at Unilever. His work in the marketing department included two overseas assignments, and led to him taking the role of Country Manager. After 15 years with Unilever, he joined the American pharmaceutical company Bristol-Myers Squibb as the head of its consumer products portfolio for the Asia-Pacific region.

One of the businesses within that portfolio was Mead Johnson Nutrition, which later branched off from Bristol-Myers Squibb. Steve’s success within that portfolio earned him greater responsibility as he became president of the international business, then global president, and, eventually, global CEO of Mead Johnson Nutrition. Today, Steve is a non-executive director of Tesco PLC, a non-executive director for the RMA Group, and an advisor to the Thai Union Group – the world’s leading seafood manufacturer.

My conversation with Steve kept returning to one key insight: The importance of a business focusing on its core activities to succeed.

As any business grows, so do the distractions that threaten to sap energy away from its primary objectives. All too often, business leaders get caught up in non-core activities, rather than focusing on the parts of the business that actually add value for clients and shareholders. Many of these non-core activities, such as transactional finance, HR, and IT, can be outsourced to third parties, allowing the business to focus all of its energy on what it does best.

Non-core activities require large investments of time and money, without generating any direct profit for the company. This valuable human and financial capital would be much more wisely spent on improving the core functions of the business.

This isn’t a new insight. Many businesses had already discovered the link between opportunity cost and organisational structure by the late 1990s. Focus on core activities was the main cause of profitable growth for 80 percent of successful businesses in that decade.

Yet the message bears repeating during this time of digital transformation and increasing market complexity. To be sure, companies must pay close attention to new developments in their industry, and opportunities to improve their offerings – but these improvements should be specifically directed in the service of clearly defined objectives. Straying away from core competencies tends to spread the company’s resources too thinly, and even ends up confusing investors as to what the company actually does.

In an ideal world, businesses would be perfectly competent at all of the tasks that require their attention. In practice, however, specialised third parties often do a much better job at executing non-core functions. It is worth stressing that these auxiliary tasks – typically found in the fields of HR, accounting and IT, among others – are best handled by external providers precisely because they represent the core functions of those providers.

Recent technological innovations have allowed for massive improvements in efficiency for all types of administrative work. Third-party professional service providers stay abreast of each of these advancements, and are better poised to take full advantage of them. As a result, they can perform the relevant services more quickly and efficiently than a business whose goals are in another field entirely.

Delegating tasks to specialists lets businesses focus on their strengths, freeing them to devote all of their energy for the benefit of their customers and investors. The accomplishments of Steve and his team at Mead Johnson Nutrition are a perfect illustration of this philosophy in action.

When Steve became the Asia-Pacific head of the consumer products portfolio for Bristol-Myers Squibb, he quickly recognised that the business with the most hidden potential within that portfolio was Mead Johnson Nutrition.

In 2009, Steve and his team split Mead Johnson from Bristol-Myers Squibb and listed it on the New York Stock Exchange though an IPO. Although the rest of the economy was on life support – 2009 saw some of the most precarious moments of the economic downturn – shares of Mead Johnson were 14 times oversubscribed and the company was instantly valued at a level that put it into the S&P 500.

As Steve and his team transformed Mead Johnson from a US-centric company to a global multinational, Steve stressed the importance of keeping a relentless focus on the task at hand. “It was important for us to decide what we were not going to do,” Steve says. “That was equally important to deciding what we were going to do.”

Talent benefits from distillation, not dilution

As a leading manufacturer of infant formula, Mead Johnson outsourced everything that wasn’t part of their core function. Warehousing, physical distribution, financial shared services, transactional finance, IT, and traditional sales were all responsibilities that they realised could be better handled by third parties.

They also divested all of the non-core businesses of Mead Johnson. These included paediatric pharmaceuticals, paediatric vitamins, women’s health, and adult nutritional products.

“It wasn’t that those categories weren’t profitable and growing,” says Steve. “But they distracted our focus.”

By outsourcing all non-core functions and divesting peripheral activities, they were able to invest their human and financial resources into activities where they knew they could be truly world class: science, marketing, selling, and manufacturing.

When Mead Johnson was acquired by Reckitt Benckiser in 2017, its value was placed at $17 billion – four times the IPO value of the company only 8 years earlier.

The story of Mead Johnson shows how successful a business can become if it has a clear sense of its own identity, and stays true to that image. Such a commitment does not imply stagnation or inaction; on the contrary, only by knowing one’s own core identity can a business then set out with single-minded purpose to become the best version of itself.

Steve asserts that maintaining this focus is even more important now than in the past. Rapid technological advancement, globalisation, and changing consumer behaviours all represent complex challenges that require clear solutions. In order to address them, businesses should avoid the temptation of trying to do too many things at once, and instead keep their eye on the ultimate goal. “It makes you more flexible and more agile by being leaner as an organisation,” Steve explained.

My conversation with Steve had one other important takeaway regarding the power of focused thinking, particularly as it relates to the management of risky endeavours. As an example, Steve summarised the high risk, high reward environment surrounding international investment in developing countries.

Many countries with emerging markets are experiencing a rapid transformation from raw material or agriculture-based economic systems to standard industrial manufacturing economies. This commercial evolution often coincides with high rates of population growth, alongside the rapid expansion of the middle class that is made possible by the shift towards value-added manufacturing. Emerging markets therefore offer great investment potential, averaging more than twice the annual GDP growth of wealthy nations.

At the same time, however, positive results from any given investment are far from guaranteed. In many regions of the developing world, unstable currencies and uncertain political futures contribute to a highly volatile atmosphere. Gains today may be gone tomorrow, and there are many more ways for an effort to go wrong than to go right.

The solution, Steve pointed out, is to remain patient, focused, and disciplined when approaching each investment opportunity. As Mead Johnson itself has proven, rigorous analysis and shrewd investment strategies can mitigate many of the risks that would otherwise threaten entire projects.

When Mead Johnson split from Bristol-Myers Squibb, Steve and his team decided that they would invest most of their resources into emerging markets with the highest growth potential. They divested in North America and Europe and relocated that newly liberated capital into Asia and Latin America, with China getting the most significant investment.

Such a bold move required a thorough understanding of the key issues throughout the investment landscape, ensuring that the likeliest outcomes were diligently researched and planned for. This ability to perform an in-depth study of the relevant issues, made possible by the simple and focused business model discussed earlier, was a major factor in Mead Johnson quadrupling its value in only eight years. 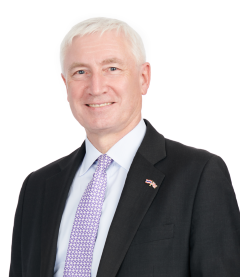